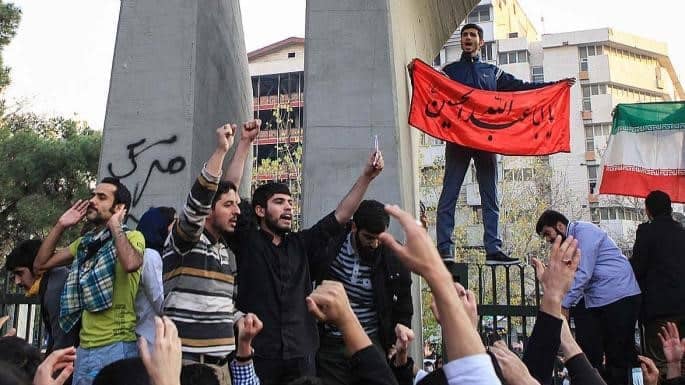 January 1-2018-The Times-Older people came out to protest at the plundering of their pensions. Youths vented fury at the high unemployment rate. Others demanded to know why their government was spending billions of pounds each year fighting in Syria while they struggled to pay the rent.
This cauldron of simmering resentment boiled over into a fourth day of mass protests against the regime in Iran yesterday, in more than 40 cities and towns. They were apparently undeterred by the threat of an “iron fist” issued earlier in the day by the head of the Revolutionary Guard, charged with protecting Iran’s Islamic theocracy.
Last night, President Rouhani said that Iranians had the right to protest and criticise the authorities but warned: “The government will show no tolerance for those who damage public properties, violate public order and create unrest in the society.”
He has called an emergency meeting with his parliamentary officials in an effort to quell the largest challenge to the regime since 2009. Financial woes, which are driving the opposition, will top the agenda when they meet today.
“The main focus will be on economic issues and the sides will make efforts to take effective measures to resolve economic and livelihood issues,” Mohammad Reza Pourebrahimi, secretary of Iran’s co-ordinating council of parliament commissions, said.
Such steps may be too little, too late, however. Spiralling inflation has sent the cost of basic commodities soaring, with the price of eggs, for example, doubling in the past week. The rocketing cost of renting a home has locked even the middle classes out of the market.
One young Iranian professional said that she had been priced out of uptown Tehran by “disgusting” price rises. “People pay about £18,500 as a deposit, with rent from £925 to £4,500 a month. Midtown to downtown rent is about £200 a month for 50 to 80 sq m — but you just don’t want to live there, you will die of the pollution.”

This is not the first time that Iranians have defied a ban to protest against the regime, but now they appear to have support from a broader spectrum of the population than in 2009, when tens of thousands of people joined rallies in central Tehran to voice their dismay at the victory of the hardliner Mahmoud Ahmedinejad in the presidential elections. However, the “green revolution” withered after a crackdown by the security forces in which more than 100 people were killed and 10,000 arrested. This time there is no talk of support for a moderate alternative within the framework of the system: the protesters are chanting their opposition against the regime, including Ayatollah Khamenei, the supreme leader.
Mr Rouhani is battling behind the scenes to navigate a way out of the increasing problems but Iran’s state media is falling back on the narratives of foreign meddling and nefarious forces to explain away the protests. The state-sponsored newspaper Kayhan claimed yesterday that Israel was behind the tide of protest that has spread across the country since Thursday and state television pinned the blame on “counter-revolution groups and foreign media”. The report added: “They are continuing their organised efforts to misuse the people’s economic and livelihood problems and their legitimate demands to provide an opportunity for unlawful gatherings and chaos.”
The authorities blocked public access to Instagram and the secure messaging app Telegram as the protests continued yesterday, justifying it as an attempt to “restore peace” — but such tactics may no longer be enough to contain a disparate protest movement that is rapidly morphing into an uprising.
“Everyone is worried because there is almost no leadership, but personally I think it is a good thing. It makes it harder to contain,” Kaveh Nematipour, who fled Iran after taking part in the protests in 2009, said. “People have lost faith in reforms. That can be very dangerous.”
In a further embarrassment for the country’s rulers, the protests have reached Tehran — coinciding with an annual parade organised by the authorities to mark the end of the “sedition” of the green revolution.
“Iranians are pissed off with their regime and they will use literally any opportunity to profess that unhappiness in public,” Mr Nematipour said. “The pace at which things have escalated is breathtaking. Last time they gave things about five or six days before they started to cause casualties.”
Such sentiments will confound analysts who warned that President Trump’s renewed hard line on Iran, after the warming of relations during the Obama years, would serve only to galvanise the regime. Mr Trump has repeatedly pledged to tear up the deal brokered by his predecessor, which would have lifted US economic sanctions on Iran in return for it halting its development of nuclear weapons.

Government offices and shops in Tehran have been torched
The blockade stops American companies conducting almost any business in Iran and similar sanctions have been imposed by the EU. The measures have hurt Iran’s economy and the pockets of its people — but their anger now appears to be directed towards their regime rather than the West.
“While the overwhelming majority of the people of Iran are suffering from poverty, inflation and unemployment, most of the country’s wealth and revenues is spent on military and security apparatuses and military and regional interventions, or is being looted by the regime leaders or goes into their bank accounts,” said Maryam Rajavi, president-elect of the Paris-based opposition movement the National Resistance Council of Iran.