SPECIAL REPORT: IRAN’S LEADER ORDERED CRACKDOWN ON UNREST – ‘DO WHATEVER IT TAKES TO END IT’ 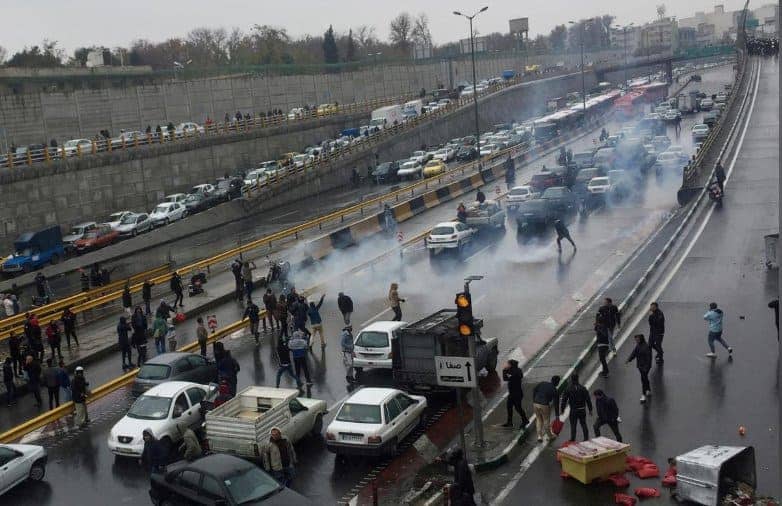 (Reuters) – After days of protests across Iran last month, Supreme Leader Ayatollah Ali Khamenei appeared impatient. Gathering his top security and government officials together, he issued an order: Do whatever it takes to stop them.

That order, confirmed by three sources close to the supreme leader’s inner circle and a fourth official, set in motion the bloodiest crackdown on protesters since the Islamic Revolution in 1979.

About 1,500 people were killed during less than two weeks of unrest that started on Nov. 15. The toll, provided to Reuters by three Iranian interior ministry officials, included at least 17 teenagers and about 400 women as well as some members of the security forces and police.

The toll of 1,500 is significantly higher than figures from international human rights groups and the United States. A Dec. 16 report by Amnesty International said the death toll was at least 304. The U.S. State Department, in a statement to Reuters, said it estimates that many hundreds of Iranians were killed, and has seen reports that number could be over 1,000.

The figures provided to Reuters, said two of the Iranian officials who provided them, are based on information gathered from security forces, morgues, hospitals and coroner’s offices.

The government spokesman’s office declined to comment on whether the orders came from Khamenei and on the Nov. 17 meeting. Iran’s mission to the United Nations did not respond to a request for comment for this story.

In a statement Monday following publication of this article, a spokesman for Iran’s Supreme National Security Council described the death toll figure as “fake news,” according to semi-official Tasnim news agency.

What began as scattered protests over a surprise increase in gasoline prices quickly spread into one of the biggest challenges to Iran’s clerical rulers since the 1979 Islamic Revolution.

By Nov. 17, the second day, the unrest had reached the capital Tehran, with people calling for an end to the Islamic Republic and the downfall of its leaders. Protesters burned pictures of Khamenei and called for the return of Reza Pahlavi, the exiled son of the toppled Shah of Iran, according to videos posted on social media and eye witnesses.

That evening at his official residence in a fortified compound in central Tehran, Khamenei met with senior officials, including security aides, President Hassan Rouhani and members of his cabinet.

At the meeting, described to Reuters by the three sources close to his inner circle, the 80-year-old leader, who has final say over all state matters in the country, raised his voice and expressed criticism of the handling of the unrest. He was also angered by the burning of his image and the destruction of a statue of the republic’s late founder, Ayatollah Ruhollah Khomeini.

“The Islamic Republic is in danger. Do whatever it takes to end it. You have my order,” the supreme leader told the group, one of the sources said.

Khamenei said he would hold the assembled officials responsible for the consequences of the protests if they didn’t immediately stop them. Those who attended the meeting agreed the protesters aimed to bring down the regime.

“The enemies wanted to topple the Islamic Republic and immediate reaction was needed,” one of the sources said.

The fourth official, who was briefed on the Nov. 17 meeting, added that Khamenei made clear the demonstrations required a forceful response.

“Our Imam,” said the official, referring to Khamenei, “only answers to God. He cares about people and the Revolution. He was very firm and said those rioters should be crushed.”

Tehran’s clerical rulers have blamed “thugs” linked to the regime’s opponents in exile and the country’s main foreign foes, namely the United States, Israel and Saudi Arabia, for stirring up unrest. Khamenei has described the unrest as the work of a “very dangerous conspiracy.”

A Dec. 3 report on Iran’s state television confirmed that security forces had fatally shot citizens, saying “some rioters were killed in clashes.” Iran has given no official death toll and has rejected figures as “speculative.”

“The aim of our enemies was to endanger the existence of the Islamic Republic by igniting riots in Iran,” said the commander-in-chief of the elite Revolutionary Guards Corps, Hossein Salami, last month, according to Iranian media.

The Revolutionary Guards declined to comment for this report.

Iran’s interior minister said on Nov. 27 more than 140 government sites had been set on fire along with hundreds of banks and dozens of petrol stations, while 50 bases used by security forces were also attacked, according to remarks reported by Iran’s state news agency IRNA. The minister said up to 200,000 people took part in the unrest nationwide.

“SMELL OF GUNFIRE AND SMOKE”

For decades, Islamic Iran has tried to expand its influence across the Middle East, from Syria to Iraq and Lebanon, by investing Tehran’s political and economic capital and backing militias. But now it faces pressure at home and abroad.

In recent months, from the streets of Baghdad to Beirut, protesters have been voicing anger at Tehran, burning its flag and chanting anti-Iranian regime slogans. At home, the daily struggle to make ends meet has worsened since the United States reimposed sanctions after withdrawing last year from the nuclear deal that Iran negotiated with world powers in 2015.

The protests erupted after a Nov. 15 announcement on state media that gas prices would rise by as much as 200% and the revenue would be used to help needy families.

Within hours, hundreds of people poured into the streets in places including the northeastern city of Mashhad, the southeastern province of Kerman and the southwestern province of Khuzestan bordering Iraq, according to state media. That night, a resident of the city Ahvaz in Khuzestan described the scene by telephone to Reuters.

“Riot police are out in force and blocking main streets,” the source said. “I heard shooting.” Videos later emerged on social media and state television showing footage of clashes in Ahvaz and elsewhere between citizens and security forces.

The protests reached more than 100 cities and towns and turned political. Young and working-class demonstrators demanded clerical leaders step down. In many cities, a similar chant rang out: “They live like kings, people get poorer,” according to videos on social media and witnesses.

By Nov. 18 in Tehran, riot police appeared to be randomly shooting at protesters in the street “with the smell of gunfire and smoke everywhere,” said a female Tehran resident reached by telephone. People were falling down and shouting, she added, while others sought refuge in houses and shops.

The mother of a 16-year-old boy described holding his body, drenched in blood, after he was shot during protests in a western Iranian town on Nov. 19. Speaking on condition of anonymity, she described the scene in a telephone interview.

“I heard people saying: ‘He is shot, he is shot,’” said the mother. “I ran toward the crowd and saw my son, but half of his head was shot off.” She said she urged her son, whose first name was Amirhossein, not to join the protests, but he didn’t listen.

Iranian authorities deployed lethal force at a far quicker pace from the start than in other protests in recent years, according to activists and details revealed by authorities. In 2009, when millions protested against the disputed re-election of hardline President Mahmoud Ahmadinejad, an estimated 72 people were killed. And when Iran faced waves of protests over economic hardships in 2017 and 2018, the death toll was about 20 people, officials said.

Khamenei, who has ruled Iran for three decades, turned to his elite forces to put down the recent unrest — the Revolutionary Guards and its affiliated Basij religious militia.

A senior member of the Revolutionary Guards in western Kermanshah province said the provincial governor handed down instructions at a late-night emergency meeting at his office on Nov. 18.

“We had orders from top officials in Tehran to end the protests, the Guards member said, recounting the governor’s talk. “No more mercy. They are aiming to topple the Islamic Republic. But we will eradicate them.” The governor’s office declined to comment.

As security forces fanned out across the country, security advisors briefed Khamenei on the scale of the unrest, according to the three sources familiar with the talks at his compound.

Khamenei, the three sources said, was especially concerned with anger in small working-class towns, whose lower-income voters have been a pillar of support for the Islamic Republic. Their votes will count in February parliamentary elections, a litmus test of the clerical rulers’ popularity since U.S. President Donald Trump exited Iran’s nuclear deal — a step that has led to an 80% collapse in Iran’s oil exports since last year.

Squeezed by sanctions, Khamenei has few resources to tackle high inflation and unemployment. According to official figures, the unemployment rate is around 12.5% overall. But it is about double that for Iran’s millions of young people, who accuse the establishment of economic mismanagement and corruption. Khamenei and other officials have called on the judiciary to step up its fight against corruption.

“BLOOD ON THE STREETS”

Officials in four provinces said the message was clear — failure to stamp out the unrest would encourage people to protest in the future.

A local official in Karaj, a working-class city near the capital, said there were orders to use whatever force was necessary to end the protests immediately. “Orders came from Tehran,” he said, speaking on condition of anonymity. “Push them back to their homes, even by shooting them.” Local government officials declined to comment.

Residents of Karaj said they came under fire from rooftops as Revolutionary Guards and police on motorcycles brandished machine guns. “There was blood everywhere. Blood on the streets,” said one resident by telephone. Reuters could not independently verify that account.

In Mahshahr county, in the strategically important Khuzestan province in southwest Iran, Revolutionary Guards in armored vehicles and tanks sought to contain the demonstrations. State TV said security forces opened fire on “rioters” hiding in the marshes. Rights groups said they believe Mahshahr had one of the highest protest death tolls in Iran, based on what they heard from locals.

“The next day when we went there, the area was full of bodies of protesters, mainly young people. The Guards did not let us take the bodies,” the local official said, estimating that “dozens” were killed.

The U.S. State Department has said it has received videos of the Revolutionary Guards opening fire without warning on protesters in Mahshahr. And that when protesters fled to nearby marshlands, the Guards pursued them and surrounded them with machine guns mounted on trucks, spraying the protesters with bullets and killing at least 100 Iranians.

Iran’s authorities dispute the U.S. account. Iranian officials have said security forces in Mahshahr confronted “rioters” who they described as a security threat to petrochemical complexes and to a key energy route that, if blocked, would have created a crisis in the country.

A security official told Reuters that the reports about Mahshahr are “exaggerated and not true” and that security forces were defending “people and the country’s energy facilities in the city from sabotage by enemies and rioters.”